Although coaching supervisors may be aware of these demarcations, there remains the risk that they might inadvertently carry some baggage attached to the traditional meaning of the word. I have noticed this from time to time while observing coaching supervisors and it must be recognized by the supervisor and put aside.

The three main coaching bodies in the world define coaching supervision as follows:

‘Coaching supervision is a formal and protected time for facilitating a coach’s in-depth reflection on their practice with a Coaching Supervisor. Supervision offers a confidential framework within a collaborative working relationship in which the practice, tasks, process and challenges of the coaching work can be explored. The primary aim of supervision is to enable the coach to gain in ethical competency, confidence and creativity so as to ensure best possible service to the coaching client, both coachees and coaching sponsors. Supervision is not a ‘policing’ role, but rather a trusting and collegial professional relationship.’ – Association for Coaching.

‘Coaching Supervision is a collaborative learning practice to continually build the capacity of the coach through reflective dialogue for the benefit of both coaches and clients.’ – International Coach Federation.

Coaching supervision is a way of reflecting on one’s own practice. Having another person present helps to focus the mind, view situations from different perspectives and gain some reassurance that we are making the best choices in how to support our clients. It is not necessary for the supervisor to be more experienced than the supervisee, as that would be a throwback to the original meaning of ‘supervision’, where the supervisor is there to correct and instruct. However, there may be an advantage in being able to consult someone more experienced, particularly for new coaches.

At the time of writing none of the coaching bodies requires the supervisor to be qualified specifically in supervision. However, it is generally recommended that the supervisor is a qualified and practising coach. Some coaches choose to be supervised by practitioners in different fields such as therapy, in order to receive another perspective.

Most coaching bodies recommend regular supervision, which might be interpreted as one hour every month or one hour to every 15 coaching sessions.

Most of the work that has been published to define coaching supervision has so far been acquired from the field of psychotherapy. Some of the elements provide an effective framework for supporting and developing coaches, others less so, and many coaches believe that coaching requires a supervision model of its own because the requirements are different. Psychotherapists, whose role is prescriptive and diagnostic, must train for many years and be rigorously supervised to safeguard the mental health of the patients in their care. Coaching, however, is 100 per cent client-led, there are no judgements, prescriptions or diagnoses, and therefore virtually no risk to the coachees.

Coaching supervision in the workplace

Below is our coaching supervision model for organisations. The coloured ellipsoids identify the areas of focus, and the writing around the outside represents the skills and behaviours which can be used during a coaching supervision session. The model is called a ‘contract’ because each party bears a responsibility to the others and has to be mindful of where boundaries lie: 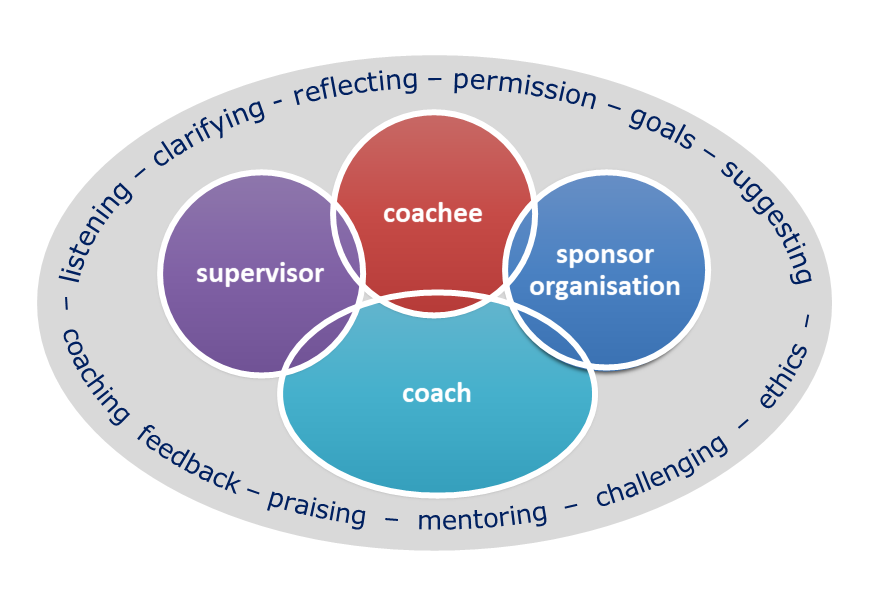 Situations sometimes arise which relate to the benefit of the sponsor, or the ethics of the coach in relation to the sponsor. An extreme example is where a coach has been hired to work with a manager on the manager’s performance. However, the manager tells the coach that he wants to leave the organization and use the coaching time to support him in finding another job. Can the coach ethically take the payment while working specifically against the organization’s expectation? The coach cannot tell the organization because of the ethic of confidentiality in the coach–client relationship. There is no easy answer to this situation, and this is where the coaching supervision session is likely to be helpful.

Structure of a Coaching Supervision Session

Whereas the Four-Way Contract is about the presence the supervisor brings to the session, their focus, and the tools they employ, the GROW-Supervision Framework below provides a structure to support coaching supervision sessions and is based on the GROW model. 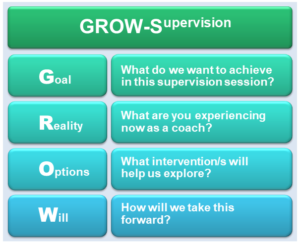 In a coaching supervision session, the four sections represent:

In any coaching approach, whether a conversation, session, or meeting we always start by identifying our goals. A solution-focused approach raises energy, clarifies and unifies direction, and enables people to measure how far they have come.

In a coaching supervision session, this is where the supervisor and the coach can explore the achievements and challenges that the coach is currently experiencing. Out of this exploration, new insights may arise and the supervisor will be able to ascertain how best to help the coach.

The coaching supervisor now has a variety of tools and techniques to choose from including coaching, mentoring, offering insights and advice, comparing experiences, or using an intervention from their Coaching Supervision Toolbox.

In line with in the classic GROW model, this time is spent identifying new insights and ways for the coach to move forward.

As in any coaching session, meeting or new relationship, the coaching supervision session should start with some form of Contracting, and end with Closure, where the supervisor and coach can consolidate on the session, express thanks and appreciations, and measure how far they have come.

Tools for the coaching supervisor

There are also a number of techniques and tools which are not part of the foundation coaching skill set, but which are related to coaching and enhance a coach or supervisor’s effectiveness, including Somatic Coaching, coaching feedback, techniques for resolving self-limiting beliefs, the Karpman Drama Triangle, Transactional Analysis, metaphor, and Clean Language.

Once we are in the coaching supervision space, how can both coach and supervisor ensure that the time is used most effectively? The supervisor is advised to start by contracting with the coach, to establish how the relationship will work and to align expectations. Then the supervisor may work in any of these areas:

Coaching supervision works well in a group setting where people can learn from each other. At the time of writing, the Association for Coaching runs free monthly Coach Supervisor/Mentor calls, where an AC Assessor hosts a call with up to eight coaches who discuss issues, share tips and benefit from exchanging their experiences. These calls are not intended to take the place of regular one-to-one coaching supervision.

Peer to peer or mentor

One of the key values of supervision is the creation of a space where coaches can reflect on their own work. Therefore, the practice of peer coaches  supervising each other is a viable proposition and the supervisor does not necessarily have to be more knowledgeable or experienced than the supervisee. Some coaches supervise each other without charge; others pay an experienced coach or qualified supervisor.

When we take the time out to think about any issue, we often gain new insights and perspectives, and this can come about through talking, sleeping on the problem, meditation, prayer, writing, research or any other kind of self-reflection. Having someone whose stated purpose is to focus attention on us for a defined amount of time maximizes the chance that we will experience some kind of breakthrough. It is part of the value of coaching, therapy, counselling, mentoring, teaching, friendship, parenting, and of course coaching supervision.

International speaker, writer and broadcaster Carol Wilson is Managing Director of Culture at Work and a Fellow of the Institute of Leadership & Management and the Association for Coaching, where she is the former Head of Professional Standards & Excellence. A thought-leader in coaching, and a cross-cultural coaching expert, she designs and delivers programmes to create coaching cultures for corporate and public sector organisations worldwide and has won awards for coaching and writing. She is the author of ‘Performance Coaching: A Complete Guide to Best Practice Coaching and Training’, now in its third edition and featuring Forewords by Sir Richard Branson and Sir John Whitmore, and ‘The Work and Life of David Grove: Clean Language and Emergent Knowledge’. She has contributed to several other books and published over 60 coaching articles, including a monthly column in Training Journal.

If you would like to reproduce or quote from this article, please  include the credit: