Asking permission is a skill often encountered, but rarely noticed, in inspiring leaders, popular friends and colleagues, individuals with high empathy, and the sort of people who seem to get along with everyone. I created the Permission Protocol model to illustrate the full range of areas where asking permission can make a difference: 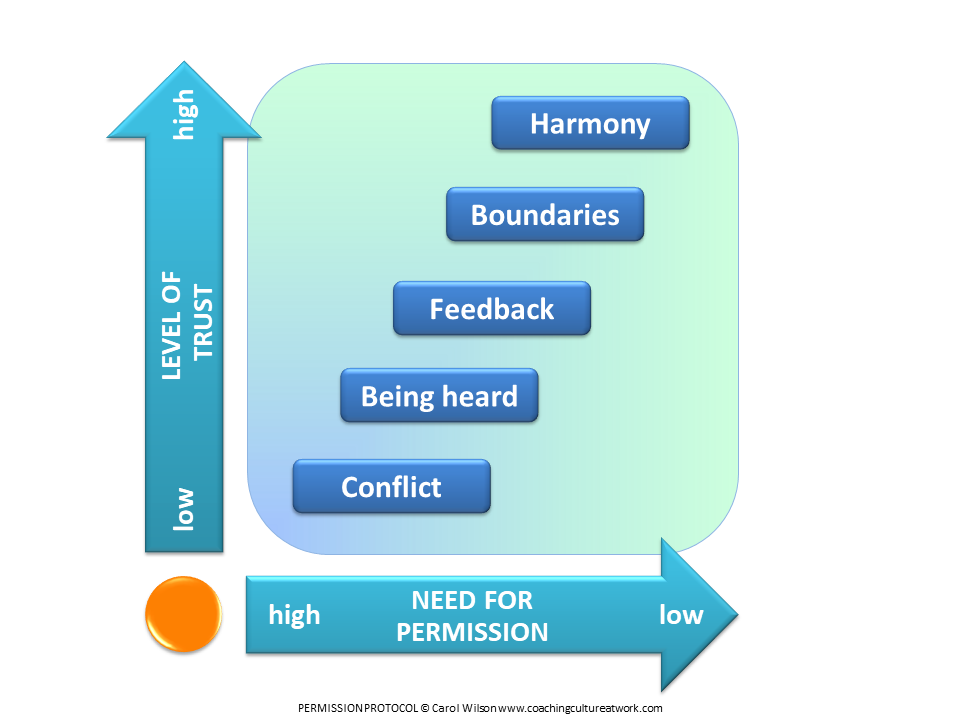 Imagine being on the receiving end of these two phrases, and pause for a moment to ponder how each feels:

“Yes, but I think we should do it this way!”
“Could I suggest an idea?”

“Yes, but” are probably two of the most contentious words in the English language and, in my experience, in other languages as well. In a second, these words hold the power dismiss everything that has been said before – and all too often, the person who said what has gone before feels dismissed as well. This is how the seeds of conflict are planted, whether between two co-workers, or between two world leaders, and it is how wars start.

Why should it be so dangerous to speak our minds when we disagree with someone? Does that mean we should never speak up? No, of course not! It is all about being in control, and goes back to primitive times, when our brains were formed in a world where lack of control might mean the difference between life and death – freezing without shelter, perhaps, or being eaten by an animal.

All too often, when we feel control slipping away in the workplace today, it feels like a life or death situation all over again. Panic sets in, the primeval responses of flight, flight or freeze take over, and the blood drains from our heads to our legs, in readiness to run, which leaves us less able to think clearly just when we need it the most.

Asking permission buys us time, when on the receiving end, and helps to relax other people when we are in a position to dispense it. The very words “Could I?”, “May I?”, or “Do you think?” lower the tension, because they give people that sense of control. The result is that everyone feels less threatened, is able to avoid the flight/flight/freeze response, and can think more clearly; a potential battle becomes a constructive discussion. Disputes are far easier to resolve if they never happen in the first place!

Permission is equally useful in less fraught situations. Have you ever sat in a meeting, and found yourself unable to get a word in? Whether one-to-one, or in a group of people, some conversations seem to be impenetrable, or we might not feel confident enough to speak up.

In these situations, there is a permission-based phrase which acts like a magic wand to stop everyone talking, and capture their attention: “Could I add something to that?”. How does it work? Here is an example:

“First of all we should do our research. I can instigate a survey of the department heads in each country. We’ll need translators of course. And then we can collate the survey and pull out all the different strands. Then there we can summarise that and show the results to management. Once they agree, I will find training courses for everyone to resolve the issues that the survey might throw up. And then …”

“Could I add something that might be helpful here?”

The phrase “Could I add something to that” (or relevant words to that effect) works in three key ways:

At the end of the day, like so many coaching related approaches, the effectiveness of this method is down to simple politeness. If we listen and show respect to other people, we earn the right to be treated in the same way.

Another situation where permission can make all the difference is in giving feedback, whether to people less senior, or more senior, or on a par with you. This has proved to be particularly useful for parents with their children, too.

Permission can be useful in situations where no negative conditions exist. For example, the inaugural meeting among members of a newly formed team is often full of optimism and energy. Then, as plans unfold and the members get to know each other, differences show up and misunderstandings can arise. If people understand that an effective team needs a range of different skills, methods and ways of thinking, the team will flourish. If any one type tries to force a particular set of methods upon the others, the team’s energy will be turned towards in-fighting and jockeying for position, instead of winning success and meeting targets.

Jock Lowe, former Flight Operations Director for British Airways and the Concorde fleet, used to remind his pilots that their enemy was not within the cockpit, where conflicts sometimes surfaced among the team, but outside, where a problem might  cause the plane to fall from the sky.. Squabbling among co-pilots, or a fear of speaking up to a bully, might end in the team having to face the ultimate enemy – death.

An organisational team’s enemies are less dramatic, and more likely to be competitors in business, but they could lower end-of-year bonuses, or even bring about the demise of the organisation. The same can happen with a political party or a non-profit organisation. If the organisation is a hospital, the team might be risking death again – not their own, but that of a patient. The stages that a team might go through were identified by Bruce Tuckman and are described in my article “Bruce Tuckman’s Forming, Storming, Norming & Performing Team Development Model”.

To return to our newly formed team, asking permission can mean the difference between going through Tuckman’s ‘storming’ stage, or undertaking a more positive and fruitful passage towards ‘norming’ the team. Imagine the impact that the two different approaches below might make to the way you feel, and to your responses, if you were one of the Heads of Department gathered together by John, the CEO of a newly formed corporate division: You can see that this conversation is heading into the realms of long-lasting conflict between team members, as well as bullying from the boss. Some will keep their heads down and stay silent during meetings in future, and the project will be deprived of the benefit of their ideas and experience.

Whether they have taken to fight, flight or freeze, first thing the members will probably do when they leave the meeting is to start looking for other jobs. The team will lose its most talented members and be left with the ones who were unable to find alternative employment.  Everyone will feel stressed and demotivated. Let’s try the scenario again with a different approach:

Doesn’t that feel better? The keys to John’s approach are (and he achieved all of this in one short phrase):

There is a final level where asking permission is essential, although you will probably never hear the actual words spoken out loud. That is in a relationship where people have complete trust in each other – trust that the other/s will always be honest, kind and respectful towards them, and always have their best interests at heart. This type of relationship is usually between two people, but it is sometimes possible with the members of  a long-term team, or a family.

In such close relationships, the words of permission do not need to be spoken out loud, and might indeed sound awkward or superfluous, because they are inherent in the nature of the relationship. Where you will see them is in the body language of the people concerned, which is open, relaxed and, quite often, mirrored by the other party or parties. In such trusting relationships, people may speak quite abruptly, criticise without caution, and have vigorous arguments, all without damaging the fabric of their rapport with each other.

Sometimes we hear the words of permission but do not have any sense of being asked for it. A typical example is of a politician being interviewed, but refusing to answer difficult questions. The interviewer may keep interrupting the irrelevant answers, until the interviewee says “May I finish?!?” This statement takes the form of a question, but is not actually a request for permission, because it attempts to seize control rather than proffer it.

There are boundaries in conversations, which range along a continuum from giving control to taking control:

These boundaries lie in the invisible realm of permission. People often overstep them by failing to ask it, but are rarely aware of it. Asking permission is a way of recognising and honouring personal boundaries.

In some countries, unlike most of the Western world, a nod of the head means no, while a shake means yes. When Westerners visit such a place, they soon pick up on that custom, and adjust their behaviour accordingly. Whereas we know that countries may display different cultures, it is not often acknowledged that people have personal cultures in their heads, which arise from the families in which they grew up, their school or work experiences, and any other influences that might have held sway.

So there could exist two families living next door to each other which, on the surface, seem similar in terms of physical appearance, work, schooling, professional standing, and children. The cultures of those families, however, may polarise: one could be repressed – the other open; one relaxed and friendly – the other territorial and suspicious; one optimistic – the other pessimistic; there might be criticism and aggression in one family – while the other may be supportive and calm.

Anyone who has identified their personality profile, and explored those of others, may have an understanding of how differently other people’s brains seem to be wired, and how perilous the path to empathy and understanding can be when two different types attempt to work together. People who like to live within a framework of rules and regulations may feel threatened by the sort of visionary innovators who feel stifled by rules, and vice versa. Those who like everything to be written down find it confusing when ideas are expressed only verbally. However, in order to succeed, the more types the team contains, the better, so it is best that they all learn to rub along together.

No decision will have been made to think and feel in these different ways.  It is not in the realm of choice, like which political party to vote for. These attitudes are deeply seated in our unconscious minds, and could be termed our ‘personal culture’). Breaching the gap is where the habit of asking permission comes in useful.

This tug-and-war over permission and control exists in all relationships to some extent, and has done for as long as the human race has documented its thoughts. The proverb “Good fences make good neighbours”, represents the theory that strong boundaries must be in place in order for good relationships to flourish, and exists in every known language, including Latin: